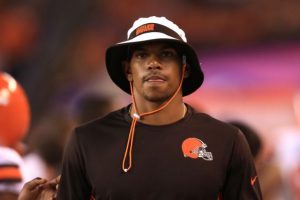 Browns have a very solid wide out in Terrelle Pryor

In two preseason games, Terrelle Pryor has been one of the best wide outs in the entire NFL. Pryor has been very good as a deep threat.  Pryor has wheels and showed it last night.

When the Browns came out on the field and called a pass play, Pryor knew he was going to beat one of the best young corners in the game. Pryor was covered by Desmond Trufant, and boy did he make him look silly.

“I knew I had him when we called the play,” Pryor said, via Cleveland.com. “I knew I was going to beat him.”

Pryor had Trufant beaten by two to three yards.  He was very wide open.