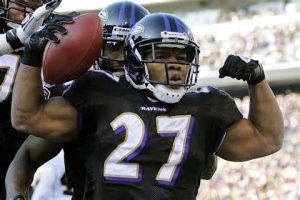 How bad does Ray Rice want it?  That is the question you have to ask yourself, and yesterday he revealed his passion when he told Tom Pelissero of USA TODAY Sports that he would donate his entire salary in 2016 to organizations that help prevent domestic violence if he was signed.

“All the scrutiny that I’ve got, it was deserved, because domestic violence is a horrible thing,” Rice said. “Me donating my salary is something that’ll be from the heart for me. I only want to play football so I can end it the right way for my kids and for the people that really believed in me. But I know there’s a lot of people affected by domestic violence, and every dollar helps. It’s raising awareness.”

Rice said he would give the money to both organizations that raise awareness and others that support survivors of domestic violence and their families.

“People need homes. People need shelter when they’re in a crucial situation,” he said. “I’ve donated a lot of money to charities, but I had a situation where it was a national crisis. I’m not saying I’d be (donating the salary) to get on the field, but it’s something that will show where my heart is. My heart is about finishing the right way and helping people along the way.”

Rice would likely only get a minimum salary which is less than a million dollars, but that would be a huge contribution to Domestic Violence.

This would not fix things, but I would love to see it happen.  Everyone in life deserves a second chance, if his own fiancee can forgive him, then we should too.