Dallas Cowboys have four of the top five jersey sales 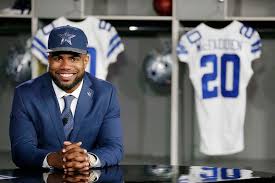 That is pretty impressive if you ask me. I love that the Cowboys are back selling jerseys again.