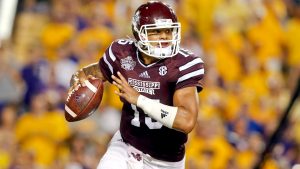 Dallas Cowboys fourth round pick Dak Prescott has been found not guilty of DUI according to the Jackson Clarion-Ledger. The arrest happened in Starkville, Mississippi, and it may have dropped him some in the draft, but he will not have to deal with the issue anymore.  Prescott was found not guilty of DUI and speeding in Starkville, where he attended Mississippi State, on Wednesday.

“Dak is obviously extremely relieved this process is over,” Prescott’s lawyer Jay Perry said, via the Jackson Clarion-Ledger. “He’s looking forward to going back to Dallas and then to California to compete in camp and learn from Tony Romo.”

Hopefully Prescott can stay clean now.  He has been in the news a couple times over the years.  He is in a great place and hopefully he can stay clean, because the Cowboys can use a good back-up.