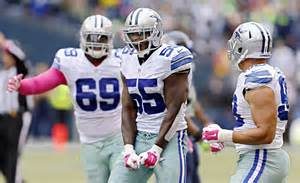 Cowboys are pissed that Rolando McClain has been skipping OTA’s, but they will still keep him

The Dallas Cowboys will not get to use Rolando McClain for the first 10 games of the season, because he has been suspended.  His suspension caused the team to go out and sign Justin Durant last week, and while many thought McClain would be cut, that is not the case. According to Jerry Jones, the coaches were not ready to give up on McClain just yet.

“Everybody lobbied to have McClain on the team. Every coach that’s associated with the team lobbied for that,” Jones said. “To be fair to everybody concerned, we didn’t know that he was going to get suspended. But his issues were potentially recognized, maybe not to the extent that he would lose the games that he got in this suspension.

“But make no mistake about it: With all of his warts, he still considered a potential asset for the team by the coaches.”