Bama offensive lineman blew a 0.00 when he was arrested for a DUI 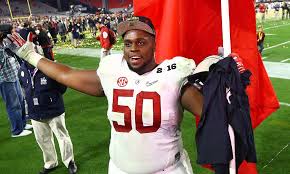 The legal limit for alcohol in Alabama is 0.08, which would need to be required to charge someone with a DUI arrest.  Alabama offensive lineman Alphonse Taylor however was arrested when he blew a 0.00.  That means the man may have not even consumed a beer.

According to TideSports.com, Taylor’s blood alcohol content was 0.00 at the time of his DUI arrest on Sunday, July 17. Taylor, who performed poorly during a field sobriety test and showed signs of fatigue, initially called Tuscaloosa, Alabama, police that morning to report he had struck another vehicle.

“I have reviewed the reports and based on the blood alcohol concentration of .000 and him having just been in an accident, I believe the case has some points to work with for a defense,” said Taylor’s defense attorney, Jason Neff, via Tide Sports. “As always, I need to get all the information and facts before we can make a complete analysis.”

How can this even be allowed?  Come on this is horsedoodoo.