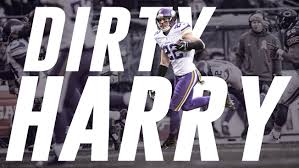 Harrison Smith of the Vikings received a huge pay raise

Harrison Smith made the Pro Bowl for the first time in his career last year and now he is being rewarded for his play. The former Notre Dame star agreed to a deal worth $51.25 million, per Ian Rapoport of NFL Network. The deal includes a $10 million signing bonus and averages $10.75 million per season, which makes Smith the second-highest-paid safety in the NFL, behind Kansas City’s Eric Berry.

Do you think the Vikings overpaid for Smith?