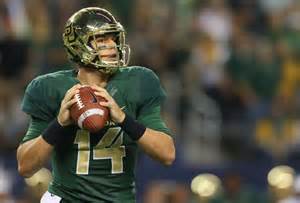 Former Baylor quarterback Bryce Petty may be the best Jets quarterback right now on their roster, and he is going out there this year with a chip on his shoulder.  According to an interview with Manish Mehta of the New York Daily News, Petty will not be a prick to Christian Hackenberg whom the team selected early. He is ready to prove he belongs though.

“They chose the dude for a reason … because they have a slight doubt about my capabilities,” the 2015 fourth-round pick told Manish Mehta of the New York Daily News. “So for that, I want to take that personal. But the thing is it doesn’t matter if it’s Year 2 that they pick a guy or Year 12 that they pick a guy. I’m going to have that same mentality. Every time they think I can’t do something, I’m going to take it personal.”

“You go out and compete, but it’s not like you want to rip the guy’s throat out,” Petty said. “At the end of the day, he’s your teammate. If there are questions that he has, I’m going to answer them. I’m not going to be a d— about it. Fitz wasn’t a d— to me about it. That’s not my style.”

I like this concept, I hope Petty has a wonderful offseason.