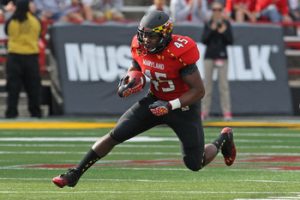 Maryland running back Brandon Ross has been released by the Vikings

The team cut former Maryland running back Brandon Ross, who was pretty impressive his final year with the Terps.

Travis Raciti joins the Vikings after spending his first NFL season in Philadelphia on the club’s practice squad. He originally signed with the Eagles as an undrafted free agent following the 2015 NFL Draft. The former San Jose State Spartan played in 49 games (45 starts) as a DT and was one of just seven players in school history to serve as a team captain in multiple seasons (2013, 2014). He was a two-time all-conference performer and tied for 10th on the San Jose State career list with 27 tackles for a loss.