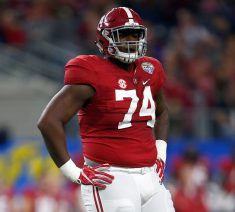 Alabama left tackle Cam Robinson, a potential top pick in the 2017 NFL draft, has been arrested on a felony weapons charge and a misdemeanor drug charge.

According to the arrest report, the two were found with a bag of marijuana and two handguns, one of which was reportedly stolen. Robinson was charged with a felony for the stolen gun. Both were charged with possession of a controlled dangerous substance.