Titans offensive lineman tweets he is retiring, then deletes it quickly 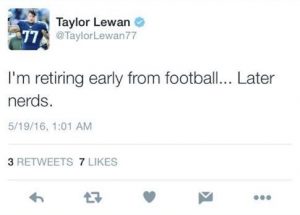 Is Taylor Lewan upset about something?

Taylor Lewan said earlier this year that he was not happy and would not be happy about playing right tackle. Then the Titans did not help the matter by drafting an offensive tackle in the first round.

The Titans used their first-round pick (No. 8) to select Michigan State tackle Jack Conklin. The selection of Conklin with a high first-round pick fueled speculation that the Titans would insert him at left tackle and move current left tackle Taylor Lewan to the right side. Lewan apparently heard the rumors, but said he’s not worried.

“I never thought anything of it because I know I’m not a right tackle,” Lewan told the Tennessean. “I’m a left tackle. I knew I was the left tackle for this team and I knew once I had the opportunity to talk to (Titans general manager) Mr. (Jon) Robinson and Coach (Mike) Mularkey that they would hear my piece and where I was from.”

Well yesterday, Taylor Lewan tweeted he was going to retire, and then quickly deleted it. It did happen at 1:01 in the morning, maybe he was drunk.  Shoot maybe he was upset about something, but he quickly deleted the message.  I just wonder if this is a sign that the Titans are planning on playing Jack Conklin at Left tackle?

I do not know what it was but I am sure Lewan will be answering some questions regarding the situation.