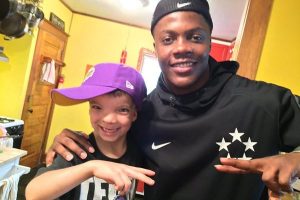 Obadiah Gamble, a six-year-old Minnesota Vikings fan and huge Teddy Bridgewater supporter was shocked when his favorite player accepted his invite for his birthday party.

Gamble made a song on Youtube called Hey Teddy, asking Teddy Bridgewater to come to his Birthday party.  Well, the super star quarterback did not let him down.

Bridgewater showed up to the Birthday party and made Obadiah’s night!!!