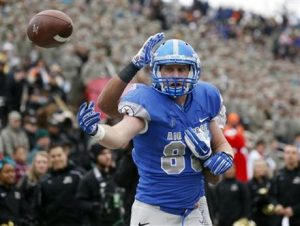 The New Orleans Saints continue to make roster moves. According to Nick Underhill of the Advocate the Saints have placed WR Shane Wynn on waivers. The team signed a player to take the roster spot of Wynn.

According to Joel A. Erickson the Saints are signing TE Garrett Griffin to a contract after he tried out for them this weekend.

Griffin, a 6-foot-4, 240-pound player, made 41 catches for 678 yards and eight touchdowns in his career at the service academy.

Joel A. Erickson reports that undrafted free agent TE Chris Bazile will have a second tryout with the Saints at their minicamp in June.

Ferris State WR Jacob Lampman announced via his Instagram account that he’s signed a contract with the Saints.