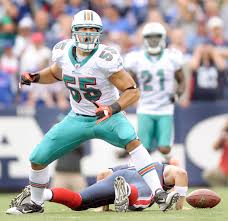 According to TMZ Sports, Miami Dolphins linebacker Koa Misi was involved in an altercation at CYN Nightclub on Sunday.

The report was filed by a Ft. Lauderdale police officer — who says he was working a detail at Cyn Nightclub around 3:41 AM on Sunday morning when he witnessed Misi and some friends get into an altercation with another group.

The cop says it appeared as if the parties were going to separate and leave — but “Misi and other members of his group charged toward the nightclub entrance [at the other group].”

The cop says “I witnessed Misi strike [the victim] in the head, causing him to fall to the ground.”

The man who was struck did not want to press charges. Wonder what will happen now….