#Redskins are hosting 33 players including the best quarterback available 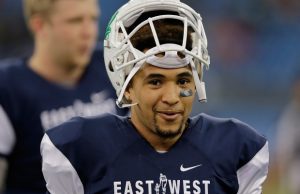 Vernon Adams should be on a team, and hopefully the Redskins make it happen

The Washington Redskins are hosting 33 players including the best quarterback not on a roster.  His name is Vernon Adams.  Right now I think the Redskins would be crazy not to sign Adams, because he could be an amazing back-up to Kirk Cousins.  Here are the other 32 players that were brought in for a visit.