Could Nick Chubb miss several games to start the season for Georgia? 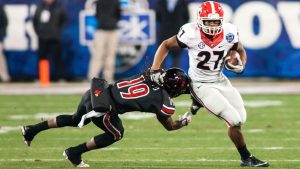 Nick Chubb suffered one of the nastiest knee injuries I have ever witnessed, but the big back is hoping to get back on the field this year.  Longtime SEC analyst Tony Barnhart of Gridiron Now, believes Nick Chubb will miss the first couple games before he’s back to 100 percent.

“The orthopedic people that I’ve talked to say from the date you injure the way he injured that knee, it’s a calendar year,” Barnhart said during a recent appearance on 1010XL in Jacksonville. “So if he comes back before the end of September, I’m going to be surprised. But if he comes back anywhere close to what he was before, Georgia’s going to develop the quarterback and they’re going to have a pretty good football team.”

Chubb was optimistic he would return before the season started, but he may not be one hundred percent. When Chubb was healthy he was running like a Heisman Trophy Winner. If he can rebound this year he will hear his name called early.  Some may be scared of his knee but that kid is a physical freak.