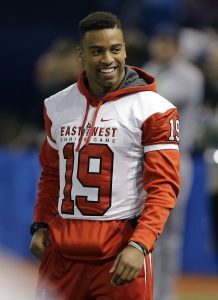 Keenan Reynolds has been given permission to play for the Baltimore Ravens this season, Secretary of the Navy Ray Mabus told the “Dan Patrick Show” on Friday. Reynolds will fulfill his service commitment in the Navy Reserves, which will allow him to play full-time for the Ravens, according to Jamison Hensley.

Reynolds was scoring touchdowns left and right last year for the Naval Academy, and now he will get the same opportunity to play in the NFL.

Patriots longsnapper Joe Cardona will be allowed to play in all 16 games as well. Cardona was the Patriots’ fifth-round pick last year and served as their long snapper in all 16 games.