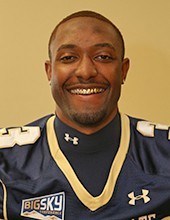 Keeton was a former transfer from Nevada, who had a solid season in 2015 for the Bobcats. Keeton has NFL bloodlines as his cousin Ted Brackens played for Jaguars, uncle Sylvester Cooper played for Rams.

Robinson was with the Giants and released recently. He has been in the league for several years, but will now have to hit the waiver wire.