Former NFL player reaches goal to land a service dog; Thanks to you all 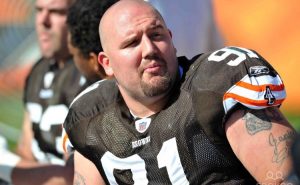 A couple days ago we made a post about a former NFL player named Brian Schaefering who was trying to save up enough money to buy a service dog, because of injuries he had suffered over his playing career.  Brian was a 5 year NFL veteran who played college football at the University of Illinois and D2 Lindenwood. He was an undrafted free agent in 2008, who really needed help to land a service dog.

Doctors have diagnosed Brian with TBI (traumatic Brain Injury),  depression, anxiety (PTSD), memory loss, and he struggles a great deal with chronic pain daily. Brian is still being evaluated for CTE, which has been in the headlines lately.

Doctor’s recommended that he should have a service dog to help him around. Well the former player made a Go Fund Me page.  We found out about it and contacted Brian to see if we could help. I made an article and reached out to the NFL as well as the NFLPA.  I was contacted back quickly by both Troy Vincent (NFL President) and Eric Winston (NFLPA President).  Both were very concerned and reached out to Brian immediately.

The NFL Trust also reached out to me in which I gave them Brian’s number. As of a few hours ago, Brian was still 1200 dollars short, that was until a former teammate and college Alum pitched in a big donation to put Brian over the hump. It all started when former Illini Alum Peter Christofilakos made a donation to a former teammate. Then the Illini came together!

Anthony Pashos aka Tough Tony Pashos, made a donation of 1000 dollars to help Brian get close to the limit. Pashos and Brian were teammates for the Cleveland Browns and both attended the University of Illinois. The final goal was met when another former NFL player and alum chipped in. That was when former Illinois quarterback and former NFL QB Kurt Kittner finished off the goal. A total of 29 people donated and made it happen, and I would like to thank you all too, but thought it was really cool that his teammate and former Alum remembered him.

I am not writing this to promote my site or what we did. I wrote this because it is pretty cool to see the NFL and his former teammates/alumni stepping up to help a friend.  That is what the NFL is really about. It is about a bond; one that cannot be broken.  Similar to a marriage, you are teammates, and friends who are in a very elite group.  This was great to cover, and I wish Brian and his family the best.  Thank you to the NFL, Thank you to Troy Vincent, Thank You to Eric Winston, Thank you to the NFL Trust, and Thank you to Anthony Pashos and Kurt Kittner.  It is pretty cool to see everyone step up.  God Bless!!!!