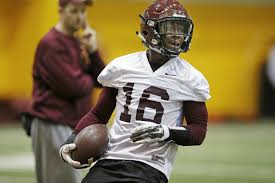 Jeff Jones was one of the best wide receivers in the nation coming out of high school and now he is in trouble.  Jones was arrested and charged with felony drug possession.

Jones, a former Minnesota Mr. Football and Minneapolis Washburn star, was taken into custody and formally charged by Bloomington police for possession of controlled substance/narcotics. His bail was set for $28,000 with a court date Monday.

He earned MVP honors in the Under Armour All-America Game. After redshirting in 2014, Jones switched from running back to receiver in spring practice.  Jones was no longer with the Gophers.