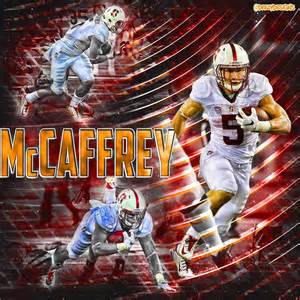 Christian McCaffrey was the best running back in the nation last year, and he dominated every game he played in. McCaffrey broke the NCAA record for all-purpose yardage in a single season last year, as he amassed 3,864 yards. The record was held by Oklahoma State and Detroit Lions great Barry Sanders, with 3,250 yards. When people talk about McCaffrey they always say he has power, but very rarely do they say he is explosive and that upsets him.

“When you read about white athletes these days and white skill possession receivers specifically, one word you’ll always find is tough,” McCaffrey told the publication. “You’ll rarely see explosive, athletic, stuff like that. … You get a little bit upset: ‘I ran the same 40 as this guy, and you’re calling him … .’ People do the eye test and underestimate me, so I do play with a chip on my shoulder.”

If McCaffrey has a year like he did last year, watch out.  I would not be shocked to see a team draft him in the first round.