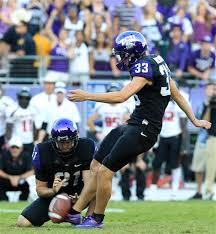 We are learning that two more TCU Horned Frogs will attend the Dallas Cowboys local day. Both safety Derrick Kindred and kicker Jaden Oberkrom will attend the workout to impress scouts and coaches.

Oberkrom was a Lou Groza Award Semifinalist this past season, and was named Second Team All American.

Kindred finished second on the team in tackles with 87 last season.