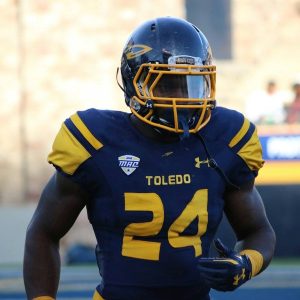 Rolan Milligan Jr. is a stud safety, that NFL teams will find intriguing.

The University of Toledo

An event called Rockethon that they have in the basketball arena on campus where we raise money for and support children and families of Mercy’s Children Hospital in Toledo.

My role model has to be my mother. She always finds a way to make things happen for me and my siblings no matter what.

I tried basketball for a season but I wasn’t that good YET, so I didn’t want to play anymore. I did competitive weightlifting my junior and senior year of high school. I tried track but didn’t like it.

I played a lot of special teams throughout my career. I played corner my first two years and some SAM linebacker my junior year.

My versatility. I’m aggressive, physical and will tackle and I can cover as well which is difficult to do at the nickel spot.

I look for different concepts teams use at different areas of the field. I look at receiver splits, feet, their releases, things like that. There a lot of other things as well but those are just some of them.

JJ Nelson was the toughest player I had to face. My junior year I had to cover him everyday in practice at UAB.

I don’t compare my game to anyone else’s game. I do admire a lot of NFL players though. My favorite player will always be Sean Taylor.

The biggest obstacle of my life was deciding to go to junior college at Reedley College. I barely had any money while I was there so I had to learn to budget my money for necessities. My mother lost her job about a month and half after I got there. It was my first time being that far away from my family. I think it helped me mature more than anything else.

I say the same prayer before every game.

My biggest strength is being able to adjust. I’ve been to four different schools in four different systems and I feel as if I made an impact while I was at each on and off the field. The only year where I didn’t have a position change was at Reedley College my sophomore season where I played only corner back. 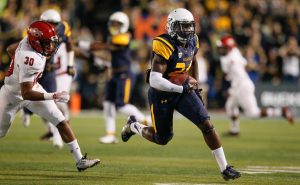 Rolan Milligan taking back an interception for the University of Toledo

My biggest weakness is my tackling in my opinion even though coaches that I have spoken with have complimented me on that particular part of my game.

I would tell them that I’m the best at my position in the draft and will prove it to them. I’m coming to work everyday to be the best on and off the field.

My uncle Carl Stephens who passed away in 2005, my nephew Walter Freeman, and my mother Faye Jones.