Meet Ladarius Vanlier; One of the most explosive players in the Draft 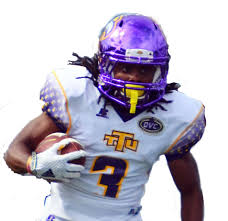 Undersized. A label associated with Ladarius anytime his name is mentioned when it comes to the next level of football. Despite his small stature, it his hard to deny his remarkable ability to find lanes, which gives fits to opposing special teams coordinators. At 5’8” and 175 lbs, it’s tough to fathom this Tennessee Tech making an impact in the pros. It may not be worth a draft pick in the eyes of a front office, but how could anyone deny his tape, accolades, and most importantly, speed? Regardless, the kid definitely deserves a spot in training camp because there is tremendous upside with bringing him on board.

Vanlier’s highlight reel exhibits incredible acrobatic moves, such as this. While the elbow looks to be down, Vanlier possesses the balance, tenacity, and determination to make the most out of plays. He plays bigger than his weight because he refuses to go down.

You can be fast and strong, but both of those traits will only get you so far. Vanlier has a very rare combination of speed and vision. As you can see on this bubble screen, Vanlier can find the lanes before they are developed.

Excels at making something out of nothing. Watching him play is a spectacle!

Here is another example on how well he can anticipate a hole opening and then hitting that hole hard! Defenders have to recognize the lanes being opened because by the time you see it develop, Vanlier will have already zoomed through it. Vanlier may not have the frame to be a running back at the next level, but that type of speed will have teams drooling.

While the Ohio Valley Conference may not hold the best talent in college football, it is a bit silly how Vanlier can burn these defensive backs. Even with solid angle pursuits, these defenders can’t get close to him.

He hit “B” three times in a row! This video game-like balance is baffling to say the least. This captivating play shows his ability to keep bouncing outside to keep the play alive.

Never say never when Vanlier is on the field. What surely looks like a TFL turns out to be a nice gain. Every time a play like this gets made, it is hard to remember he is under 180 lbs.

Vanlier is a carbon copy of Dri Archer. That being said, it would do him some good to add a little more weight in order to make a camp. The ability to make plays on the field is there, but his game relies on hitting holes quick. Those lanes may not be as open in the NFL as they are in his college days, but if that style of play can translate, I think he will be tremendous weapon in the kick return game.