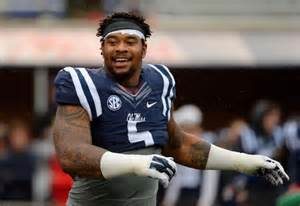 Robert Nkemdiche of Ole Miss is the best defensive tackle in this draft, and it is not even close

Robert Nkemdiche was the number 1 prospect in the country back in 2013, and if he did not have any off the field issues, he would likely have been a top 5 pick. The big and strong defensive end from Ole Miss, is rated as a mid round first round pick after teams placed red flags on him for his character concerns.

Well this stat from NFL.com, is very interesting. It looks like Nkemdiche will have an uphill battle to overcome if he wants to make the Pro Bowl.

Robert Nkemdiche was the No. 1 high school recruit in the country in 2013, according to Rivals.com. Of the previous nine players (before Nkemdiche) to receive the honor, none went on to make a Pro Bowl in the NFL. The last player to do so was Adrian Peterson, Rivals’ No. 1 overall recruit in 2004.