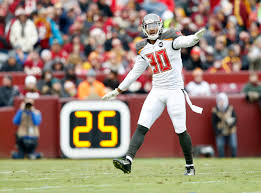 McDougald, a fourth-year safety, became a restricted free agent (RFA) when that offer was extended and technically had until April 22 to seek a contract from another team, with the Buccaneers retaining a right-of-first refusal. Like the majority of RFAs, however, McDougald chose to sign the tender offer, which becomes his contract for the 2016 season. That decision puts him on a path to become, potentially, anunrestricted free agent next offseason.

DePaola, on the other hand, was an exclusive rights free agent (ERFA) after he also received a qualifying offer from the team. As such, the team’s incumbent long-snapper could only negotiate with the Buccaneers and was thus even more certain to remain with the team in 2016.