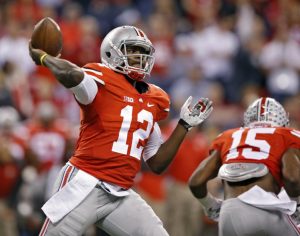 Cardale Jones from Ohio State has Bills scouts drooling over him

The Buffalo Bills have not had a Franchise quarterback since Jim Kelly. In 1982, the Buffalo Bills spent a 2nd round pick on Matt Kofler the gunslinger from San Diego State, he was supposed to be the Bills future quarterback, but the team was not impressed with him after he came to camp. The next year the Buffalo Bills were able to get it right when they drafted Jim Kelly. The team even though they had Kelly still drafted Frank Riech in the third round of the 1985 draft. Kelly would end up leading the Bills to four straight Super Bowls, and Frank Reich would serve as his back-up and a very reliable one at that. The team would still draft another quarterback in 1986.  The team would then not draft another quarterback until 1995 when they took Todd Collins in the second round of the draft from Michigan.

Over the past 10 draft the Buffalo Bills have used just three picks on quarterbacks and not one has worked out for them. They’ve lacked a franchise quarterback the entire time. The great Ron Wolf used to say, get a quarterback a year, which is a pretty sound philosophy.

This isn’t to say that the Bills don’t believe in Tyrod Taylor, because they want him to be the answer, even if they’re not committing to a long-term contract at this point. But they don’t even have depth at the position, a fact that was reinforced in the two losses last season, when Taylor was out with a knee injury.

Pre-draft work doesn’t mean they’ll draft one high. At No. 19 or 48 in this years draft the Buffalo Bills need to consider drafting another quarterback.  While I am a huge Tyrod fan, the Bills need to get solid back-up play because if something happens to Tyrod what will the Bills do? E.J. Manuel is not the answer…..