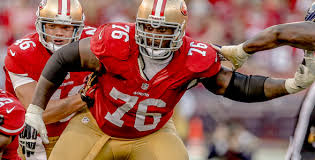 49ers offensive lineman Anthony Davis if filing for reinstatement according to his Twitter feed.  He posted this message on his social media account.

“I’ll be filing for reinstatement to the NFL later this year,” Davis tweeted Friday. “Dealing with [GM] Trent [Baalke} is giving me a headache.”

This isn’t exactly new news, as it was reported two months ago that he wanted to get back into the NFL. This is simply a reenforcement of that earlier report. At the time, there had not been any confirmation from Davis about what was going to happen, so everything had to be treated as a rumor. Now that there is confirmation, it appears that things are moving forward.