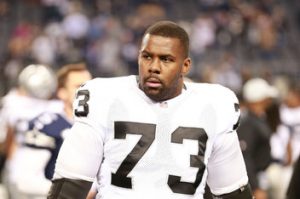 McCants was selected by the New York Giants in the 2012 NFL Draft. McCants played college football for the University of Alabama at Birmingham, starting 42 games at left tackle.

Benson Mayowa played college football for the University of Idaho. He is of Nigerian descent.

Thorpe signed with the Kansas City Chiefs as an undrafted free agent in 2012. He played college football at Auburn and was a member of the 2010 BCS National Championship team.