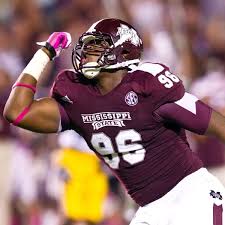 Do these Mississippi State players need someone to hold their hand?

Many NFL scouts have defensive tackle Chris Jones as a top round guy, but they are going to have to re-evaluate his character now.

Former Mississippi State defensive lineman Chris Jones, who is projected as a potential first-round pick in the NFL draft, was arrested Wednesday on charges of driving with a suspended license, according to a report.

The Clarion Ledger, said Jones was arrested at 2:22 p.m. after he was stopped for speeding in Starkville, Mississippi. He posted a $922 bond and was released.

This is the second Mississippi State player to be arrested in the past couple days. Quarterback Dak Prescott was the other, and they are both in the draft in less that 50 days…..SMH.