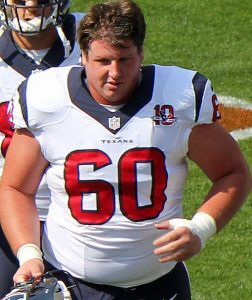 Ben Jones, the man, the myth, the legend from HBO Hardknocks is heading to Tennessee. The Titans have agreed to a deal with the Texans center/guard according to Bear Warner.

Jones was drafted in the fourth round of the 2012 NFL Draft by the Texans out of Georgia.

Jones was expected to backup Pro Bowl center Chris Myers while also seeing time at guard. Starting in Week 7 of the 2012 NFL season, against the Baltimore Ravens, Jones became the starting right guard for the Texans.

Titans C Ben Jones gets a four-year, $17.5 million deal. And $7.5 million of that is fully guaranteed.