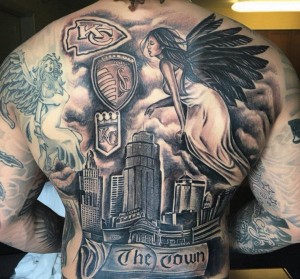 Broncos pass rusher Shane Ray gets a nice back tattoo, but wait is that a Chiefs symbol?

It is a little strange when a player gets his hometown football team tattooed on his body, especially when he is playing for a division rival. Shane Ray the Kansas City native, posted a picture of his new back tattoo which had the Chiefs and Royals emblem on his back, but he is taking backlash for it.

Many fans are dragging him because he plays for their division rival Broncos.  People need to grow up, he is just getting a tattoo of his hometown team. Rontez Miles has a Steelers tattoo and he plays for the Jets. He too was criticized for it, but you cannot take the city that raised them out of the player. I like it Shane!!!