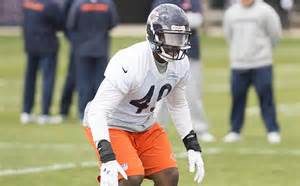 The Chicago Bears have re-signed linebacker Sam Acho according to his agents the SportsTrust Advisors.

.@TheSamAcho is returning to the @ChicagoBears for the 2016 season. Congratulations, Sam! #BearDown

Acho played college football at the University of Texas. He was selected by the Arizona Cardinals in the fourth round of the 2011 NFL Draft. In 2015, Acho appeared in 15 games for the Bears and recorded 39 tackles, no sacks, a forced fumble, a recovery and a pass defense.