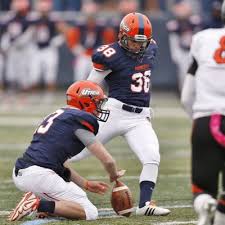 Tommy Woodburn has a strong leg, and is pretty accurate

Had the opportunity with other teammates to participate and help out one of the nations largest Heart Run/Walk that is hosted in the city of Utica. The event raised over one millions dollars. Being able to represent our college and team where a former player passed away from a heart condition was one of the most important things for me.

My grandfather is my role model. He is a World War II veteran still living today. He always looks out for the family before himself and has inspired me to be just like him one day.

I played baseball, basketball, and soccer.

What separates me is my passion for the game, leadership qualities, and phenomenal work ethic to be the best that I can be.

I want to make sure everything is the same every time. Kicking is all muscle memory and keeping the same technique is very crucial. Finding out the places where the technique needs improvement is crucial. Some important things consist of plant foot, locking of the kicking leg, follow through, and eyes up after follow through.

Dan Andrews, running back from Brockport State University. He is a very smart player and can run the ball with speed down the field as well such smooth lateral movements. He is going to be a senior for the 2016 season and is definitely someone to look out for playing on Sundays in the future.

I would compare myself to Dan Bailey of the Dallas Cowboys. Dan presents poise when he is on the field and has a very easy approach to kicking the football. Dan Bailey is not the biggest or strongest, but knows what he has to do to help his team whatever way possible by getting the job done in clutch situations. Dan Bailey is also a captain for the Dallas Cowboys, which presents himself as a leader to the team, just how my teammates see me as. Being a dependable and reliable player is somebody coaches want on their team.

When I was in high school I played soccer until 10th grade. Not until after that season I decided I wanted to be a football player. I knew it was going to be a challenge having never kicked a football before. However, for 9 months leading to the season, I would ride my bike to the high school with a couple of footballs and teach myself how to kick.   Not having any help or knowledge, I became better and better every week and finally was ready to come a football player for my 11th grade season.

Always play the song “Dreams” by Van Halen before going out on to the field.

My biggest strength is my leadership role in any type of situation. I am a person and teammate who is always looking out for the other teammates and making sure everything that is going on during the week of prep is going right so that the team can be best prepared for the game. As a student, I am always sought out for assistance from others and making sure I can help other whatever way possible. Doing the right things on and off the field will spread the awareness to the younger players and build team moral.

I need to improve my learning and studying from my technique. This means watching more film and trying to do the most possible to be the best that I can be. 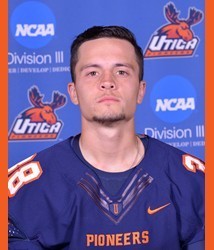 I never got recruited out of high school. I did not play Division 1 or 2 level of football. I did not get a scholarship to play. I did not play in front of thousands and thousands of fans. However, I played four years of football because I love this game and have passion like nobody else. I have shown that I have the abilities of those guys who played at higher levels. You will never have to question my work ethic or desire to be the best teammate I can be.

Pay off all of my college debt and help pay off my parents house and additional bills. If I have some extra money, I would love to buy myself an Audi R8.