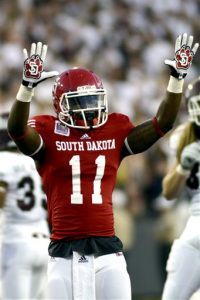 South Dakota wide receiver Eric Shufford Jr. is a solid player. He could be a steal in the 2016 NFL Draft

Started a peer mentoring program at USD. Worked with SNAP, Hold, Kick and the Inland Empire Foster Youth Sports Fair for the past 8 summers

God and My Mom. God is always working in my favor, I can’t see it, but I know it’s there. My mom did everything she could to make sure we were well taken care of. The only woman in a house with five boys, she took in our friends who were troubled, she always had an open loving heart and sometimes she would take on more than she could handle, but she never complained, she just kept going forward because that’s all she knew how to do. It helped make me who I am today.

My ability to out think my opponent. My football intelligence coupled with my work ethic will be unmatched. 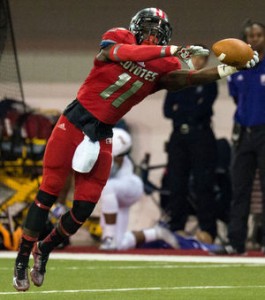 Steve Smith, I play a lot bigger than I am, I believe that I am the best player on the field at all times, the only way to prove me otherwise would be to stop me. I might not be the highest rated or the biggest or even the best, but until you prove to me that I’m not, I’ll continue to play that way.

Having my mom get sick my freshmen year. Moving back home to go to JUCO. Grinding through it to become a better player and a better man. God honestly got me through that time. I knew that it was his plan for me that I needed to follow. I had to let go and let him take control so that he could set me up with something even better

Run through hitches, slants, outs, fades, 2x each side, then work releases before I get dresses, after the coin toss, walk to the sideline away from everyone else, take a knee, say a prayer, and put 2 fingers to the sky for my little brother who was a football player and was killed in August of 2014.

My football intelligence. Having played so many positions, I have learned to think like a defender when running routes and like a QB when seeing coverage. Also, my versatility, I can go inside, outside, or in the backfield.

The amount of time I have played receiver. Only one year before I got to college. But I have taken my knowledge from other positions such as QB and used them to make me a better receiver.

You won’t find a player who is as smart and works as hard as me to be better than he was when he walked in the door that day. I outwork everyone by outworking myself everyday. With me, you wont get the biggest, fastest, strongest guy, but you will get someone who will be a leader in the locker room, who will do anything you ask him to, and who will grind harder than everyone else to prove he belongs.

Have to be a house for my mom.