Ken Stabler suffered from CTE; 87 of 91 players tested had signs of the disease 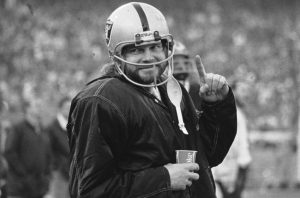 Kenny “the Snake” Stabler suffered from chronic traumatic encephalopathy, or CTE, according to a study performed by Boston University.

Scientists believe repeated head trauma causes CTE, a progressive degenerative brain disease that can manifest in depression, disorientation and aggression. So far, it’s only diagnosable after death. Dozens of ex-professional football players have been shown to have struggled with CTE.

87 of 91 tested ex-NFL players had brain disease linked to head trauma according to a study performed by the University of Boston.

This is what the report read: Eighty-seven of 91 former NFL players who donated their brains to science after death tested positive for a brain disease that is believed to be linked with repeated head trauma and concussions, researchers said.

The former players were found to have had chronic traumatic encephalopathy, known as CTE, according to the U.S. Department of Veterans Affairs and Boston University.

This is pretty scary if you ask me.  I hope they are somehow able to get the numbers down, but it is not looking promising.