Chiefs have placed Tavon Rooks on the waivers; Rooks had a heart attack last year in practice 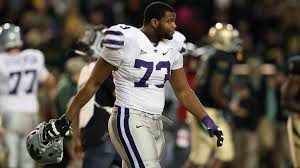 Tavon Rooks the big offensive lineman has been released today by the Kansas City Chiefs.

Rooks, a sixth-round pick by the New Orleans Saints out of Kansas State in 2014, was signed last spring as a free agent and was battling for a backup offensive tackle spot with the Chiefs, before he suffered a heart attack in practice.  This was a huge scare, but could have saved Rooks life.