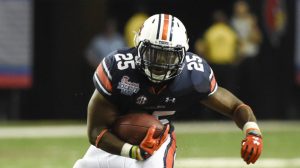 There are many players who make a bad decision to leave early to the NFL Draft.  Peyton Barber was one guy that many thought was making a bad decision, but after he opened up at the NFL Scouting Combine in Indianapolis, I respect his decision. Barber told reporters that he was homeless from age seven to 14 and also has dyslexia and ADHD.  Barber says the decision to help his Mother who is homeless played a huge part in his decision.

“(Leaving Auburn and declaring for the NFL Draft) was definitely a tough decision, if not the toughest decision I’ve ever had to make in my life,” Barber told AL.com earlier this week. “At the same time, I felt like it was the best decision for me and my family just because of the circumstances that had been going on. At the same time I realize that the running back position is in a certain sense devalued (in the NFL), and to add on to that I don’t have that many miles on my body and I know that the scouts look for that. Coming off a 1,000-yard season I felt like I had nothing to really prove.”