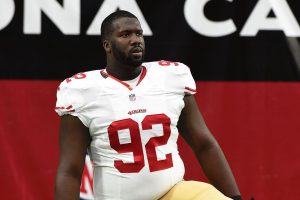 The San Francisco 49ers have extended another player to ensure he stays in Red and Gold. The 6-foot-5, 318-pound Dial was a fifth-round draft pick of the Niners in 2013 out of Alabama and played in just three games as a rookie before appearing in 14 in 2014.

The #49ers signed DT Quinton Dial to a 3-year extension worth $12M, source said. He gets just over $5M in guarantees.

General Manager Trent Baalke is happy to get him back:

“Throughout his first three seasons in the NFL, Quinton has shown consistent development and has become a key contributor in our defense,” 49ers general manager Trent Baalke said in a statement. “We have certainly seen his positive impact on the field and in our locker room, but we also recognize the impressive work he does in the community year-round. We are pleased to extend the contract of young players like Quinton and are excited to see him continue his career with the 49ers.”