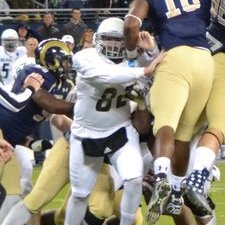 I think the coolest thing was when we were in Kansas City for the National Championship, we were able to go and visit with veterans at the local hospital.

I would have to say my mom, step – dad and my sister. They have always made sure that I was taken care of even if that meant they had to go without. Oh and my good friends Francisco and Armand, they are older than me and have lead me down the right path through their own mistakes as a student, college athlete and person. They have played a Big brother role since I met them.

I loved playing basketball, I played up until my sophomore year of high school.

I played offensive and defensive line in high school

I would have to say my ability to critique myself, a lot of snappers cant watch their own film and see small flaws that can hinder your snapping. Whether it is hand placement or release point, a snap could look good to most people but i can find ways to make it better.

First thing I look at is they type of return scheme a team has and whether they bring pressure up the middle or not so i know if I have to block. If I do then I determine the Biggest threat. I always like seeing a guy that can block kicks, I take it as a challenge.

Probably Justin Drescher from games I have watched him snap in he is one of the better blocking long snappers in the NFL. I take pride in being able to block well as a snapper.

I thought I was done with football after last season but I found out I had one more year of eligibility in the NCAA after playing in the NAIA for 3 years , I was pretty down on myself but my friends and family told me to have faith and  kept reassuring me that someone was going to take a chance on me. Finally NWMSU called and it was one of the best decisions I ever made.

I always made sure to sit in the same place at breakfast, lunch, dinner, or the bus. I also wore the same thing for every game.

There is a lot you have to overcome especially as a specialist, you see other snappers at big schools having interviews and stuff of that nature done on them. Whereas a snapper coming from a small school most people don’t even know what or where your college is let alone who you are. So overall the biggest obstacle is exposure.

Approaching every opportunity with a chip on my shoulder.

I am my biggest critic, I get pretty pissed if i mess up.

I have had to fight my whole college career, I could not afford fancy camps or top notch instructors. I am a “Blue Collar” player and I am not afraid to get my hands dirty.

Dallas cowboys and Jason Witten he is why I wore #82 my senior year.