The coolest thing I’ve done off the field was probably when I had lunch at the elementary school with the students, and also I signed a few towels after the game.

The hardest class I ever had to take was probably anatomy.

I have great hands, great speed, and great routes. I’m pretty good at the jump ball for a short WR.

When breaking down film, I watch the DB’s feet and how he is in coverage. Every DB has a weakness just like every WR has one. I’m good at reading a defensive coverage,and that the biggest part about being a WR and getting open.

I’ve played a lot of tough football players, Being from Rock Hill, SC, but Stephon Gilmore was the toughest.

I would compare myself to 2 WRs. Antonio Brown, and Emmanuel Sanders. Both of those guys are under 6’0 tall. They both have great routes and great speed.

The biggest obstacle I’ve overcome is not attending a Division 1 school. Being the #1 JUCO Wr and attending a small school really got to me, but having a great support system and being dedicated helped me overcome these obstacles.

No pre-game rituals, I usually just listen to music.

My biggest strength to me would be my hands.

I would say my biggest weakness is trying to make an extra move instead of using my speed. 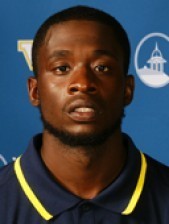 I would say I’m a very dedicated football player, that loves the game, I’m coachable, and can help a football team in many different ways.

My favorite football team growing up was the Carolina Panthers

Tupac, My grandmother, and John Madden

The first thing I would buy would be a house.