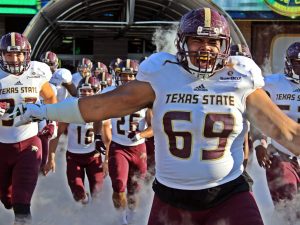 If your NFL team is looking for a run stuffer, I have one. MEET HERBERT GONZALES

This definitely has to be when I went back to my hometown community in San Antonio. It has been a historically low income neighborhood that has been labeled as a problem area. But going back and lending a hand at my local rec-center and little league football program; with free coaching and workouts was the best. Helping those kids and passing on my wisdom to younger generations was a feeling that I will never forget.

That would have to be Chemistry 2, it was a very tough class. Being able to comprehend all the concepts, along with the advanced math that it took to actually solve the different problems really took a lot of effort on my part. I’m extremely glad I finished that successfully.

Born and raised in San Antonio, Texas from an area known as “The Creek”.

My role models are simply my Mom and Dad. My father was a San Antonio Police officer. He raised me in a structured environment were being lazy was not tolerated. This man pushed me beyond measures in every aspect of life from running hills, lifting weights, and even staying up late with me to make sure my homework was done. My mother provided me with the best love and cooking a young man could ask for. She was the one who made sure I got everything I needed for me to play the game I love. From cleats, to gloves, to pretty much anything I ever wanted she made sure I had it. With these two amazing role models and of course the good Lord there was no way I could not be successful.

Yes, I played just about every sport growing up that I could get into. In addition to Football these included Basketball, Soccer, and Track & Field. Most of the time I participated in all these sports during the same calendar school year.

Yes, from little league to high school I played both sides of the ball at different positions wherever I was needed. From offensive line, tight end, and fullback on offense to defensive end and linebacker on defense.

There are several traits that separate me from the others that play my position. My experience of playing football for nearly 16 years has to be one of the most important attributes. When most got their start in middle school or even high school, I had already been playing tackle football from the age of 7. Along with my experience, I’m a technician in the trenches. I’m all about playing with a base, having low pad level and always burning my eyes on my targets. Arm extension is key.  My extreme strength also comes into play since I squat 700lbs, bench 460lbs, and power clean over 390lbs. With all these traits I play with tenacity and extreme passion. I take every play personal, I try to picture each play as a street fight with nowhere to go but through my opponent.

As a student of the game I’m looking for tendencies that offensive lineman gives away such as a High hat or Low hat (Pass versus Run). I’m also looking at how the lineman across from me plays the game. Is he an aggressive bruiser or finesse technician? Depending on the type of man I’m lined up against really determines how I will play him. I’m always trying to find a weakness in my opponent’s game in order to take advantage of. Plain and simple, the eye in the sky never lies.

Pound for pound the toughest player I have ever faced on the field was running back Malcolm Brown from the Los Angeles Rams. I had the pleasure of playing him for three years of my high school football career. He was a tough nosed downhill runner but that never stopped me from playing my game.

I would say my play is similar to that of Tony Siragusa A.K.A The Goose from the Baltimore Ravens.This has to do with the fact that he is a huge run stopping nose tackle just like I am. He didn’t receive a claim as a college football player. But, through hard work and dedication he became a starting NFL player.

The biggest hindrances for me have always been having to prove to other people just how intelligent and well-rounded I am. As well having to prove just how little effect my “notorious community” had on my overall character. The school I came from and the area of town I’m from, automatically made people think less of me as an individual. I had to constantly prove myself to everyone simply because they had no respect for my community and school program. I overcame this obstacle in life by always keeping my Faith with the Lord strong. Knowing that with him nothing was impossible and by out working everybody around me both mentally and physically.

My pregame rituals consist of sitting in my locker, reading my bible, while drinking my Pedialyte 2 hours before game time. In my final hour prior to stepping onto the field I’ll put on my Beat headphones and play War Ready by Rick Ross on repeat. During this time, I like to work up a nice sweat by doing all my ballistic and static stretches. After all this I’ll finally strap up the bonnet and bring out my inner beast.

My overall God given strength has to be my most impressive quality. As I’ve said before, with me Squatting 700lbs, Benching 460lbs, and Power Cleaning over 390lbs. There are not many men in this world that can stand toe to toe with me in a dogfight and last a quarter much less an entire game.

My biggest drawback would have to be my straight line speed. Although, my lateral quickness and short burst sprints rival most. I know this is an area I can improve on.

Simply stated, “I’m the hardest worker you have ever met. I’m someone who plays with a boulder on my shoulder. I have gone through so many trials and tribulations in my life; that were merely test of Faith by the good Lord to make me stronger. I play with such a passion for the game that words can’t even explain. I am someone that will improve your program. I bring a high energy to every practice and work out. There is not a single day that you will catch me slacking off no matter if it’s a walk thru practice or a brief stretch. I always bring my A game and I will make everyone around me bring out the best in them.  Take care and always God Bless.”

My favorite player growing up was Jerome “The Bus” Bettis who also played for my favorite team the Pittsburgh Steelers. I bleed Black and Gold when it comes to the NFL.

The three people I would choose to have dinner with would have to be The minister of Defense Reggie White, Ray Lewis, and Gabriel Rivera A.K.A Señor Sack. Each one of these players had a mentality and physicality that made them “Giants Among Men” sharing a meal with them would be an incredible moment that I’ll cherish forever.

First thing I would buy once I made it to the NFL would be the brand new house I always promised my Mom I would get her. Ever since I was a little child I could always remember telling her “Don’t worry Mama I’ll get you the nicest house you want once I make it to the NFL”, its a promise I plan to fulfill anyway I have to.