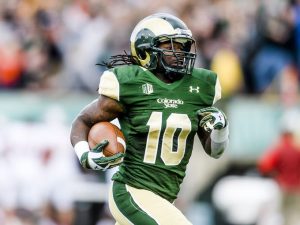 Former Colorado State running back Dee Hart is just one of many players that declared early and was not drafted. Hart is currently out of football.

This year it seems like more and more juniors are declaring for the 2016 NFL Draft.  While there are tons of perks for leaving early, one must look at the downside.

Many players overhype themselves when they read a website that has zero affiliation with the NFL, claiming they are a draft pick.  There are many decisions in leaving school early, but most are for the wrong reason.  When you make it to the NFL you are not guaranteed a 10 year career.  Many kids leave school early and feel they are a lock to make an NFL roster and that is not always the case.  Let’s look at the past two years draft’s.

In the 2014 NFL Draft, a record number of 98 underclassmen, plus four more players with degrees, were granted eligibility for the draft. Of the 102 early entrants, 38 went undrafted (37 percent).

In 2015, Seventy-four underclassmen successfully petitioned the NFL for special eligibility this year, and another 10 who already graduated but had eligibility remaining also made themselves available for the draft. Among that group of 84, however, 24 players went undrafted (29 percent).

This year I expect the number to be over 100 again.  We have already noticed multiple FCS prospects leaving early.  That is not usual, but it could end up biting some players.

Many NFL scouts are focused on Seniors only, so if an FCS or small school player does not jump off the stat sheet as well as the film study, scouts will not know who he is.  With the numbers above, that means that 30 percent of the players who declare will not be drafted.  That does not mean they will not get a shot, but your chances will be slim.

Last year, 56 players made it on a 53 man roster that were not drafted.  It seems like it is getting harder and harder for players to make it on a roster.  Just remember this because you were drafted it does not mean you will make a team. Last year alone, 36 NFL Draft picks were released from their team before 53 man rosters were formulated. Basically 7 percent of players drafted did not make a final roster sending them home.

Listen to me kids, if you are not a top 100 pick in the NFL Draft according to the NFL Draft Advisory Board, which you and your college can find out by submitting the correct paperwork to the NFL, then STAY IN SCHOOL.  According to the NFL Players Association the average career length is about 3.3 years. The NFL claims that the average career is about 6 years (for players who make a club’s opening day roster in their rookie season).

So it is simple folks, stay in school get a degree, or suffer the consequences.  In three years you may be on the street, without a college degree…..