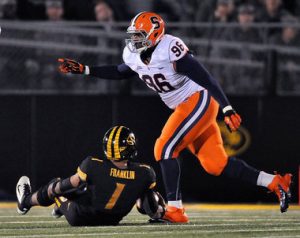 Syracuse defensive tackle Jay Bromley is under investigation in NY.

Giants defensive tackle Jay Bromley is reportedly being investigated by police for allegedly attempting to rape a woman Saturday morning at a New York hotel. While Bromley has not been charged, police are investigating a possible assault.

According to the report, Bromley a 23-year-old defensive tackle formerly of Syracuse met a woman online and the two agreed to meet at the Hyatt Herald Square Hotel in Midtown just after 6 a.m.

According to New York Daily News, the woman said Bromley attempted to rape her, and then allegedly struck the woman with his car as he left the hotel shortly after.

The Giants drafted Bromley in the third round in 2014 out of Syracuse.