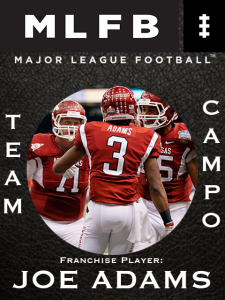 The teams have not been announced yet, but Campo chose Joe Adams the former Arkansas wide out.

Adams played college football for the University of Arkansas, and was recognized as a consensus All-American. He was drafted by the Carolina Panthers in the fourth round of the 2012 NFL Draft.