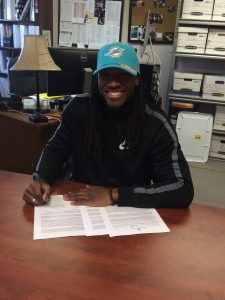 At Missouri Valley College, Davis was an All-American cornerback, but he only received a tryout with the St. Louis Rams upon exiting college. Davis was told he would need more film, and did everything  he could to get a shot in another professional league.

Davis would work out with the Arena Football League as well as the Canadian Football League, and had offers from both, but he was ready to play football. Both the AFL and CFL were taking longer than expected while the German Football League was offering him a deal to play right away. 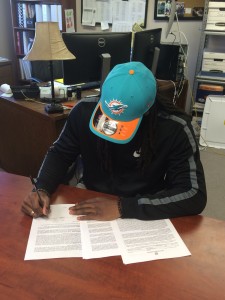 Davis knew it would not be easy to go to the GFL and then make it to the NFL, but he took on the challenge on and made the best of it.  Davis signed a contract with the Munich Cowboys and he dominated in his first  year.  Davis caught 28 receptions for 686 yards and scored seven touchdowns.  He also played cornerback for Munich hauling in 6 interceptions.

Last year Davis played for Kiel Baltic Hurricanes where he would be named the German Football League MVP.  Davis racked up 1733 yards receiving on 94 receptions and scored 24 touchdowns.  Davis averaged 133.3 yards a game in Germany this past season averaging 18.4 yards a reception.  He also led his defense with 6 interceptions this year.

The Dolphins love Tyler’s versatility and he becomes the first player to come directly from the GFL to the NFL.  Tyler will now follow in his Father’s footsteps to play in the NFL.  Tyler’s father is Clarence Davis the former Oakland Raiders running back.

Tyler is a great kid and we are super excited to announce this news. #TeamDiamond