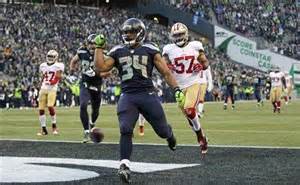 Seahawks lose running back Thomas Rawls for the season

Seattle Seahawks HC Pete Carroll told reporters that RB Thomas Rawls suffered a broken ankle and is out for the remainder of the season. Seattle rookie running back Thomas Rawls hurt his left ankle in the first quarter of a game against the Ravens and will not return.

The injury occurred during the Seahawks’ opening drive Sunday. Rawls was hit behind the line and dropped for a 3-yard loss on a play with 5:36 remaining.

Rawls gained 44 yards on six carries before leaving the game. He has been getting extended playing time as the replacement for injured Marshawn Lynch. The rookie came into the game with 786 yards rushing on 141 carries and four touchdowns