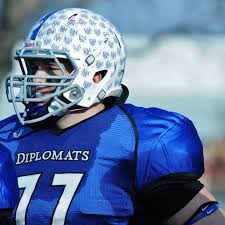 I have played Offensive Tackle for the past 8 years. I am willing to move to Center or Offensive Guard in order to play in the next level.

During the Spring my Sophomore Year, I was a volunteer at Reynolds Middle School in Lancaster, PA. I provided leadership and guidance to special needs students. I served as a classroom role model for a pathway to the benefits of a College education and athletic success through individual discussions and classroom presentations.

What was the hardest college class you ever had to take?”

As an Economics Major, most of my classes involve quantitative problem-solving. The hardest class that I have taken is “Game Theory.” This is a 300 level Economics class that involves social situations between firms.

My Father, Colin Ignatovig, is my role model because he has always supported me on and off the field. He has instilled in me that even if the right way is the long way, there is no room for shortcuts. If I dedicate myself to a goal, I can accomplish it no matter the obstacles in the way.

In High School I played Baseball, Basketball, and Wrestling.

In High School I was All-Confernece Strong side Defensive End.

What separates me from other Offensive Lineman is my knowledge of the game. I am always willing to learn from my coaches and work on any adjustments they suggest. Over my last four years, I have worked as hard as possible to come in as a Freshman and start all four years. I believe that my work at practice and in the weight room directly connects to my performance on Game day, so I give my all everyday to get better than I was yesterday. 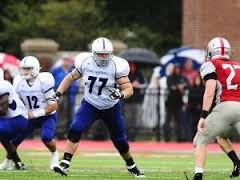 First I go through all the third and long film to evaluate who I will be blocking and to see their pass rush. Then I look at the Defensive Blitz Film to identify the stunts. After that I go through the film play after play to see the weak areas of the opponents Defense and how they react to mistakes on the next play. This also shows me how conditioned they are as a whole.

The toughest Player I have played against is Steve Ambs, a DE for Ursinus College. No matter where he is on the field, he has a motor that keeps him going. Pound for pound he is by far the strongest athlete I have faced over my four years at Franklin & Marshall.

I believe that my playing type is similar to Jason Kelce, Center for the Philadelphia Eagles. By watching him play, I see his athleticism, whether in between the Tackles or down field as a pulling Center, he is always blocking till the whistle. I also associate myself to him because, like him, I strive to be a leader on the Line.

The biggest obstacle that I had to overcome was when my mother moved from where we used to live. I decided the best thing for me was to move in with my father. This dramatic change was a big obstacle for me because I grew up raising my brother and sister who are now 6 and 8 years old and they moved with my mother. They are still a huge part of my life but because of this move I don’t see them as often as I would like. I have overcome this obstacle by managing my time and working with my mother to see my siblings as  much as my schedule allows. No matter how difficult it is, I always keep in mind the importance of family and the importance of my siblings happiness.

My pre-game ritual consists of waking up earlier than scheduled, have a big breakfast while also looking over the scouting report. After breakfast, I sit in the locker room listening to Country music on Pandora to keep me calm. Then about an hour before the game I come on the field and work on my blocking steps and imagining the defender right in front of me. Before every series on the field for the offense, I tap my helmet and face-mask to get me excited and amped to hit. I have always played with emotion.

I think as a small school football player, I will have to adjust to the speed of the game in the next level.

I think my biggest strengths are my quick feet, as well as, my technique. I think these strengths are the reasons why i am a Four-year starter, Three-year All-Confernece player, and Preseason All-American.

I believe my biggest weakness will be my size. Coming in as a Freshmen I was around 265lbs. Through personal training with Powertrain, I got my weight up to 295lbs before my senior year, while also being the fastest and strongest I have ever been.

I believe the way I play football is connected to the person I am. I am passionate in everything I do. I work hard not just for my teammates and coaches, but for myself as well. I know work comes before success and I’m willing to do whatever it takes to play in the next level. I am a student of game and strive to always get better, from being in weight room or watching film to just spending time with my offensive line coach to see what else I need to do to continue to raise the bar as the leader of our offensive line.

As a child and still now, I am an Eagles Fan. I grew up watching Brian Westbrook and Donovan McNabb which were my favorite players as a child.

Three people that I would want to have dinner with would be Dwayne Johnson, Ronald Reagan, and Will Ferrell.

With my first paycheck I would pay off my college loans, pay my dad back for all the countless events that got me to where I am today, and I would buy my 8 year old sister and 6 year old brother a trip to Disney World.