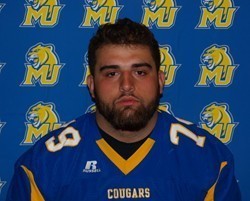 What is your name ?

What is your height/weight ?

What is your position ?

Where do you play college football ?

The coolest thing that I’ve done off the field would probably be Relay for Life and each year our team picks a few underprivileged families to bring food to around Thanksgiving and Christmas.

Anything that has to do with Math, I’d say  Statistics was probably the toughest

My role models are my mom, dad and grandfather for many reasons but they have supported me my entire life no matter what the situation and I couldn’t be more thankful to have them in my life

I think the skill that separates me from others is my footwork, for an offensive lineman I have very fast footwork and also my pulls off the line are very good

The biggest obstacle in my life that I had to overcome from a football standpoint was sitting out a season and not playing football. It was a rough year but it ultimately made me really appreciate not only football but life in general and I’m beyond thankful I was given the opportunity to play again

Work ethic, footwork, the mindset I play with

I’ll let my opponents decide that question for me

Who was your favorite football player/or team growing up?

Wouldn’t buy anything, I’d start trying to pay off my student debt I can play any position on the OL and will do whatever it takes to win and be successful