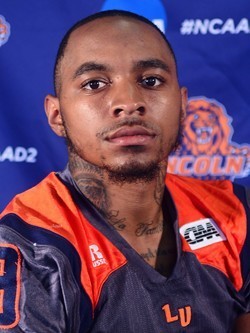 My name is Jaleel Reddick.

My positions are Defensive Back and Return Specialist

I played for Morgan State University and transferred to Lincoln University.

Off the field I’ve done tons of community service and during my summers I love helping with youth football programs to give the youth that feeling of having a big brother, father figure, or just the satisfaction of a helping hand.

The hardest class I ever had to take was by far statistics.

I am from Newark, New Jersey born and raised.

My role model is my mother. I never had my father in my life due to incarceration. Me and his time together was very brief. My mom was there to hold me down and keep my spirits up because times definitely got dark and hard. I watched her work extremely hard to take care of us. I never met a woman so strong; she is truly a superwoman just without the cape.

Other sports I played while growing up were basketball, track, boxing and baseball.

Other positions I played in football were Running back, Wide receiver and also quarterback.

At my position the thing that separates me from others is the DOG I have inside of me. When I say the word DOG it’s in reference to the relentless constant burning fire I have in me to be great and to accept nothing less than that!

When I am breaking down film; being a defensive back I tend to spend my time keying in on the strengths and weaknesses of my opponents (wide receivers, Tight ends, Running backs). I look for tendencies of Quarterbacks in their drops and look off’s. While watching out for those tendencies, I also look at play calling tendencies according to field position. I try to narrow it down to percentages of run and pass and the areas of the field being attacked. I also like to look at what route combinations teams throw together.

The toughest opponent I ever faced in my life of football is currently in the NFL. His name is Joshua Evans. He plays safety for Jacksonville Jaguars but in high school he was a quarterback; a very good one at that.

If I could compare my play to one player in the NFL it would be Tyrann Matheiu. My reason for choosing Tyrann is because the same fire I see in myself I see in him. On the field he plays fast, fearless, and physical despite his size and that’s exactly how I am on the field. Hungry and Passionate! A DOG!

The biggest obstacle I ever faced in my life was growing up in a rough neighborhood like Newark, NJ without a father. A lot of things about being a man and becoming one a mother can’t teach as well as a man can. It comes through life experiences so that one can learn for them self. Every experience isn’t always a good one though. I’m thankful for every struggle though because it made me. I overcame it by being just as tough and tougher than the people and my environment itself. I made my mind stronger than everyone around me by keeping myself focused on what I wanted for myself and my mom. I promised her that I would use this ball to get me places and I promised her we would never lay in a house with no lights cold again. It’s hard but nothing in life easy is worth having in my eyes.

Before every game it’s a must I speak to my mom, my fiancée and my daughter. I look at pictures of my father imagining what he is doing at the time and think of what he might say to me before a game. Knowing he is locked away in a box fuels an unexplainable rage and fire through my body that carries on to the field. I kiss two of my daughters barrettes that I carry to every game, then I say a prayer to Allah…After that my mind and body is ready for war.

Coming from a small school I play with a chip on my shoulder at all times; I feel as though I don’t have certain advantages players of bigger Universities have so I always feel the need to go twenty times harder. Obstacles I feel I will have to overcome are the doubts of whether I can play with the higher level of competition. I’ve always been an underdog but I’ve always refused to be defeated and here I am.

Work ethic is one of my major strengths. I’m a work horse and I refuse to be out worked by any man! I will punish myself before I let another man get the best of me. We all put our uniform on the same way. I also have an outstanding ability to adapt quick.

One of my weaknesses is being vocal. I tend to pull away from that because I lead by example. I do understand that being vocal as well as leading by example can positively effect a team. That is something I am currently working on but like everything it comes with time.

Hopefully it’s a long second, but if you were a GM and I had a second to sell myself, I would say Draft me! I’m that diamond in the rough your looking for. I will give you everything in me until there is nothing left and even when there is nothing I will dig deep and give you something! I’m a DOG!

If I could have dinner with three people dead or alive I would choose my father, Sean Taylor, and My mother. It would give me and my mom the chance to have at least one dinner with my father as a family. It will also give me a chance to pick Sean Taylor’s brain for information and pointers about improving my game.

The first big item I will buy when I am in the NFL is my mom a big house in Miami.